What does the Dutch winter famine teach us about genetics?

Home » Diet & Nutrition » What does the Dutch winter famine teach us about genetics?

The winter of 1944 in Holland, the Nazis occupy Holland, they take all the food form the Dutch land into Germany, by that causing a 5 month starvation, started at Nov 1944 and ended with the liberation at May 1945. Calorie intake dropped to 400-800 calories per day in average, which caused 22,000 deaths.

This horrible situation caused a rare human genetics experiment  with pregnant women and the effect of starvation on the unborn, or what's the effect of malnutrition on fetal life.
A paper published called "The effect of war time starvation in Holland on pregnancy and its product"

What this semi controlled experiment taught us is that if you we're a 2nd or 3rd trimester fetus; suffering starvation, your body is learning how much nutrients can he get from the environment, and this effects the metabolism and the use of sugar and fats in adult life, by storing more than the average.

Within the babies there were 2 control groups

The 3 prenatally exposed groups to the famine

The data indicated that the children that suffered famine during their pregnancy in the mid and late parts of the pregnancy we're born in a lower weight.

The Dutch famine babies weight at the age of 50 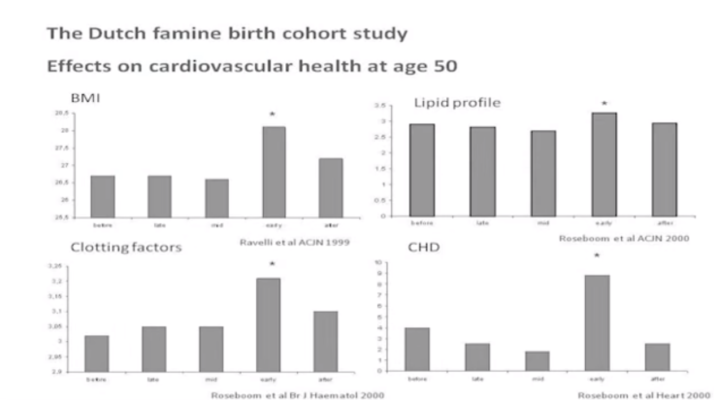 So from these numbers we can see that actually the babies that suffer the most are the ones that we're exposed to the famine in the early part of the pregnancy, they suffer more the the other groups:

One upside of that group is: increase in reproductive success.

More info about the study

This website uses cookies to improve your experience while you navigate through the website. Out of these cookies, the cookies that are categorized as necessary are stored on your browser as they are essential for the working of basic functionalities of the website. We also use third-party cookies that help us analyze and understand how you use this website. These cookies will be stored in your browser only with your consent. You also have the option to opt-out of these cookies. But opting out of some of these cookies may have an effect on your browsing experience.
Necessary Always Enabled
Necessary cookies are absolutely essential for the website to function properly. This category only includes cookies that ensures basic functionalities and security features of the website. These cookies do not store any personal information.
Non-necessary
Any cookies that may not be particularly necessary for the website to function and is used specifically to collect user personal data via analytics, ads, other embedded contents are termed as non-necessary cookies. It is mandatory to procure user consent prior to running these cookies on your website.
SAVE & ACCEPT